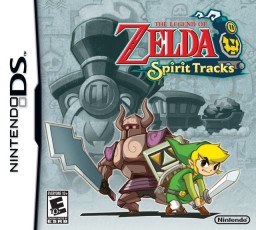 As I grow older, I increasingly become one of those gamers who spends a great deal of time reading about the hobby rather than doing it. In-between becoming a curmudgeon who complains about how they just don’t make games like they used to, I find a few games that still capture my attention. Zelda: Spirit Tracks would be one such game.

I would love to speak fondly of how Spirit Tracks embodies the wide open spaces of Ocarina, or how the interlocking and complex dungeons rivaled the masterful level design of Link’s Awakening.

Unfortunately, I cannot. The curmudgeon must come out and point out how Spirit Tracks is quite literally a game on rails. The vast sweeping steppes of Hyrule which opened up for exploration in Ocarina are no more. This new system, pioneered in the previous DS title restricts Zelda’s classical theme of exploration into a mindless grind of watching scenery fly by a train’s window.

I ought to write at great length about the more Zen aspects of Zelda, how the wandering about the luscious natural settings of an adventure game mimics the experience of a Japanese rock garden. I might point out that Miyamoto once said that he hoped that the Mario and Zelda games would elicit such an aesthetic. Nonetheless, such would be for a much longer, and vastly more academic piece. I would say that Spirit Tracks retains only a shadow of these traits. Once outside of the train, there are places to walk about, but they lack real defining character and were too small to allow me to poke around and really explore the space.

Spirit Tracks is easy. This should come as no surprise as Zelda titles started sliding into the easier realm some time ago. For the old-school gamer (or the hardcore masochist) who enjoys a good round of nigh-impossible difficulty, Spirit Tracks will disappoint. Nevertheless, for those whose skills have atrophied from the demands of “adult life,” Spirit Tracks fits the mold of a good casual distraction.

The one saving grace for Spirit Tracks is its pacing. The dungeons are small, but this has the benefit of dividing the game into bit-sized chunks. Plowing through a dungeon in an hour was standard. For a short-on-time gamer, this made playing through Spirit Tracks a very enjoyable experience. It may not possess the grace of the earlier Zelda titles, but at least it is a small bone to us adventure gamers.