Getting started with Piston can be a little daunted right now. Mostly this is because it’s a project that is still evolving and which has either little documentation or documentation that rapidly becomes wrong. A lot of games that I found made with Piston can no longer be compiled, a lot of example code needs various minor tweaks to get to compile, etc. That said, the two best items that I found where:

The first hurdle in getting Piston to work was getting the SDL2 and GLFW dependencies installed. Cargo does a great job of going out and grabbing everything else, but these two items require you to do it yourself. SDL2 was rather easy and the instructions for it can be found in the Getting Started tutorial (see above). GLFW was a bit more of a pain and I ended up going through a stack overflow question to get it working. If anything, I would just point to the Getting started tutorial to get the initial empty repository set up with cargo and all the dependencies in the Cargo.toml.

My Repository at this Point

At this point my repository looks like this I began by setting up a new Piston project as detailed in the Getting Started tutorial and from there I copied the code from the piston image example. This was just a nice starting point to ensure that everything is working and that the Rust logo would appear in the window designated.

From there, I began working through the Piston-Mov-Square project and the Getting Started tutorials and religiously commenting every line of the code with what it does. This is just something I picked up in college and a good way to puzzle out foreign code. Even if the comment turns out to be wrong (like it happened in many cases for myself), it at least is a step in manually dealing with the code.

I played around for a while and after I felt confident in the code that I had, I began abstracting it into various data objects and getting down to work. Hopefully my puzzling with help someone else to understand this faster than I.

An Explanation of the Code

We begin by loading all of our various library provided to us by the Piston developers and which we will use for getting our game window to appear on the screen. I have yet to figure out what the #![feature(globs)] lint actually does and if someone does know, I would love to find out since removing it causes everything to break. The rest of the code is just giving us access to various libraries that we will use latter on. I have tried to comment those libraries as best I could since it wasn’t entirely clear what does what.

If there is one thing that I know it’s to confine magic numbers. Let them sprout wherever you please and code maintenance becomes a mess. Hence, I have taken the various constants for our game and packaged them up into a GameConfig struct. Right now this struct defines the attributes of our window: title, height, width, frames per second, and tile size. I imagine that this structure will probably grow larger as we begin adding in actors, players, and assets. We will deal with that when the time comes.

I have also created a Game struct (more on it later). The game struct simple takes a GameConfig and returns an instance of itself. Calling run fires off our game loop which loops infinitely or until we kill the process. In essence the Game struct represents and handles the loop. We could leave this in main, but by turning it into a struct we have the option further down the line of moving it out into a module which would leave our main.rs file consisting only of loading Piston, setting the various config items and calling Game.run.

I’ve seen this simply called App, but since we are making a game, I think it should be Game. The Game simply holds the game state and runs the game loop. Inside it, I have added several methods via impl: new, run, window, and render. New and run are our public methods which we have already seen. One takes a GameConfig and returns a Game. The other starts the game loop. The remaining methods are just there to run the internals of the loop itself. Let’s walk through each method:

This one is rather simple. It is a public function (pub fn) named new. We can access it via Game::new(). It takes a GameConfig and returns a Game whose config property is config. I am sure I am mixing a lot of OOP language here, but after years of working in the realm of PHP that’s just how I end up thinking.

Run is a little messier it fires off our game loop. It takes a mutable copy of itself which allows us to access it on an instance of Game e.g. game.run(). The first line it calls is to a member function window():

This is not a public function, thus when we turn Game into a module it will not be accessible outside of the module file. We are using this essentially as a hidden or private method on Game. The window function is accessible from inside a game object via self, e.g. self.window(). We really only need one window, so this method is only called once at the start of the run method. Window returns a WindowSDL2 which is our back-end we loaded way above at the start for managing our windows. This window takes a WindowSettings struct whose values we pull out of the GameConfig stored in our Game. Either way, it makes a new WindowSDL2 and passes it back to the run method. Now back to our second line of the run method:

Now this took me a while to figure out. The call to Gl::new() must come after the creation of the WindowSDL2. In an earlier version of this I had the call to create GL after the call to create the Window. The code will compile fine if you create GL first and then the Window, but when you run it you will get a CreateShader error. I only solved this by stumbling upon an IRC log. Anyways, hold on to that gl variable since we’ll be passing it around a lot.

Rather boring. We need to create and EventSettings object to pass into our game loop.

Here is the magic! The game loop. I really like how this works in Rust. Since iterators can go from 0 to infinite we take advantage of it. The EventIterator takes the window and event_settings variables we set up earlier and returns something (I don’t know what) which is put into e. We then do a match on e to see what was returned. Right now there are only two things that can match: a call to render the screen, or everything else. Looking at some of the example code, I do see that we can catch all different kinds of events – user input, calls to update the game state, etc. but for now we are just concerned with rendering the screen. So we get a render event (Render(args)) and we call our private method render via self.render and pass in our gl variable (I said we would be passing him around a lot).

Render simply takes a mutable reference to Gl and paints to our screen. The first two lines just get the window_height and window_width out of our config since we will be using them a lot in this method. Since this is going to be a tiled game we need to know how many columns and rows of tiles we will be drawing. So I calculate that here by dividing the window’s height and width by the tile_size.

The next two lines in our render call do two important things. First we set our view port to start at the cordinates 0,0 and to extend to the width and height of our window. Second, we get a Context which I like to think as our virtual pen for drawing on our canvas. In fact, the first thing we do is fill the entire canvas with white:

This takes an rgb (red, green, blue) value that sets each to a 100% (or white) and then draws this to our window by calling draw and passing in our old friend gl.

Now let’s have some fun. Just to show that we are indeed drawing on the window, let’s fill the window with 32x32 pixel tiles each one slightly reader than the last. The effect should look like this: 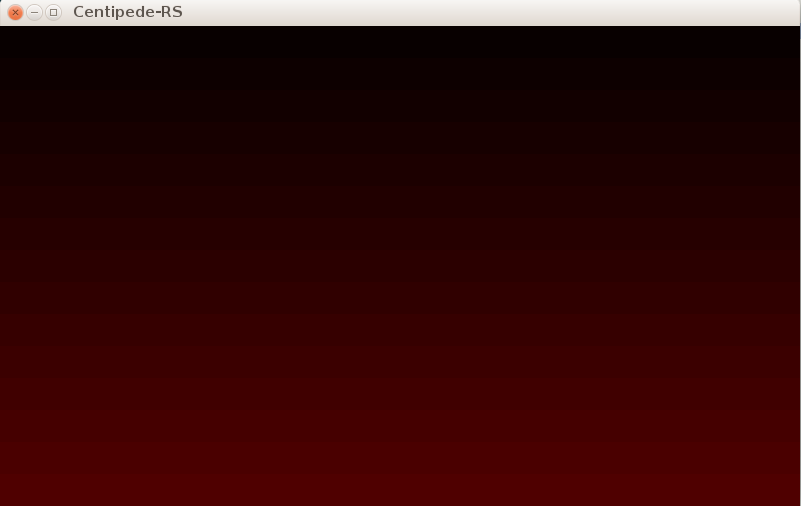 We begin by setting our starting red value:

This needs to be mutable since we will be adding to it with each iteration of our rows.

Second, we loop through each row and each column drawing a red square the size of our tiles:

What does this do? First we are looping through our rows from zero go num_rows (we calculated the number of rows earlier). On each row we adjust our redness slightly this should make each row more red than the last with the first row being fairly dark. Next we calculate row_shift this is simply done my multiplying what row we are on by the size of our tiles. This will be used to tell the context to move down 32 pixels when it gets to row 2, and down 64 pixels when it gets to row 3 and so forth. The inner loop does the same only for our columns. We loop through each column and calculate our col_shift or how far to shift to the right for each column. If I recall correctly this is the most efficient way to loop since the screen paints outwards from your upper-left corner. Finally, we draw our square. The context (c) knows how to draw squares so we pass into it the coordinates of the upper-left corner of our square (col_shift, row_shift), the width of our square as a float (tile_size), instruct the context to fill this square by calling rgb( red, 0.0, 0.0 ). Note, we passed in our red variable so the redness of the tiles should adjust as the red variable does. Last, we draw the square by calling draw and once again passing in gl.