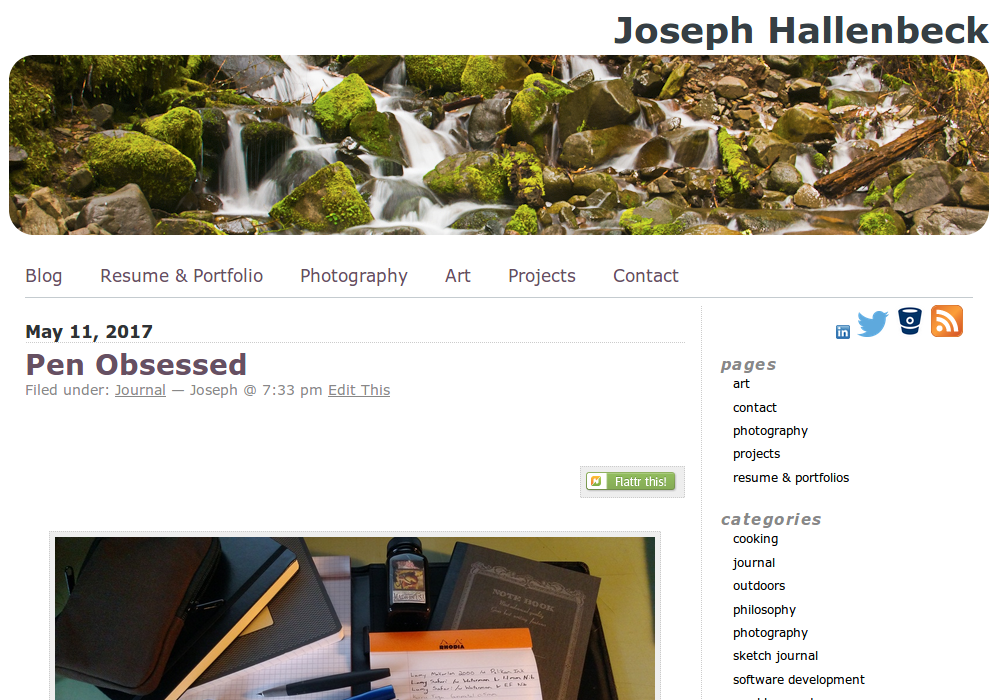 About two years ago I started muddling on a small project to update this blog. At the time, I felt that there was a need to create something that better reflected both my growth in design and front-end sensiblities but also my perspective on how we ought to approach our relationship with the web.

The blog itself has gone through many fine iterations since college. For a while it served as a platform for attracting employment interest. Now, that I am established, it is slowly becoming a platform for posting “anything and nothing” that crosses my mind. The get-me-hired aspects of the blog will probably be jetisoned onto some new, yet to be made site.

The web page is really a kind of virtual typesetting. We take the raw document in a UTF-8 encoded text with perhaps some simple markup like Markdown, and then set that document to build a complete html page. Had the medium been different, say if we were to set to print, then the output could be a PDF, DOCX file, or even a different markup type (e.g. Latex).

As I have grown as a developer, I have come to the slow realization that the relational database, while a great back-end for serializing relational objects, makes a rather poor document data store. Look at my old webcomic, Dreamscapes, which is currently offline because the CMS it was built upon doesn’t support PHP7. If we really care about our documents then this becomes a major concern. In order to edit, view, or generally interact with a document stored in the RDBMS we must have a full stack of applications that can work together and work on a given platform. MySQL must be installed and configured to work with the HTTP server and the HTTP server must support the PHP version of the CMS. This is a lot to maintain in order to simply read a document. Our ability to archive and retrieve a document becomes a mounting concern as time progresses. If we want to retrieve a document that is in such a system ten, twenty, or thirty years later we may find ourselves first wading through the labourous task of tracking down and compiling ancient software and virtualized systems just to read what could have been stored in a text file.

In light of these thoughts, I am moving all of my document-based sites to static site generators.

The article, is thus a document in my documents directory. I can write in it using the same text editor that I use for any textual document (Vim). I link it to the Jekyll posts directory to be typeset for the web, or I can run it through Pandoc to typeset it for print. If I ever wanted to self-publish a book, I could use these documents as the source to typeset into a series of chapters for an e-book or volume for Lulu. 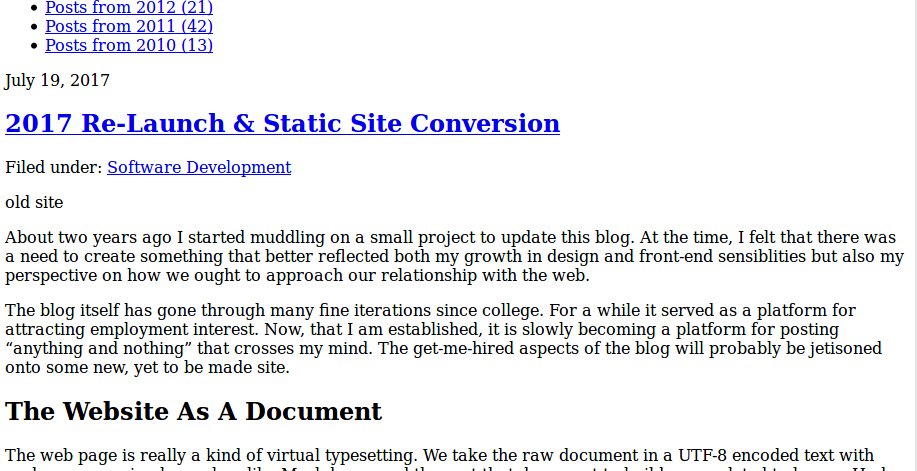 The new design is no radical departure from my last layout. Overall, I liked the old layout well enough. Unfortunately, it had a few rough spots: poor display on phones, the typical wordpress cludge of spaghetti html, and an inconsistent approach to typography.

The new layout starts with the styles outlined on the Better Motherfucking Website and then applies a very minimalist layer of front-end frameworks (Bootstrap and FontAwesome) to achieve a responsive layout that resizes nicely from desktop to phone. I took great care at implementing the correct HTML5 tags and stylesheet properties for a rather simple design. The result is that the site looks good and is fully functional even if we remove the stylesheet. Last, I carefully reviewed the text blocks possible via Markdown and Kramdown syntax and crafted a series of test articles displaying a wide variety of ways those text blocks could be combined. Working through these test articles I constructed a consistent style that when applied to my existing articles resulted in a much more readable body of text.

Comments are gone. Swept away. Lost to some MySQL dump in the back ups directory. This was a decision that took some debate. I like the idea of a distributed collection of communities discussing away on some topic. Yet, I am not interested in moderating and maintaining such a community. These communities often devolves into a cult of personalty, or which would probably be my case, abusive flame wars.

In over a decade of writing on the web, I can count the meaningful comments made on my sites on one hand. When I look at blogs that do recieve some staple comments with each post, they often become a dialogue between the creator and questioner with no real benefit to any larger community.

It seems best that discussion about some post or topic be moved into dedicated communities for discussions, that is Hacker News, Slashdot, or the healthy collection of smaller bulletin boards that litter the internet. If my words have moved someone so passionately that they must talk with me, my e-mail and twitter handles are available in multiple locations on the site. Or if you wish to rant at me at length, you can always start your own blog.

Kick Big Brother to the Curb

Google in all of it’s various forms is similarly banished. I would still like to show up in Google searches, but I have no interest in being a platform to serving up my readers to their big-data engines nor polluting my site with low-quality advertisements.

Analytics, by itself, seems a rather harmless bit of data collection. I fondly recall getting my first page-hit counter working on my geocities site over fifteen years ago. I am still amused to see how many people are reading an article and their general geographic distribution. Alone, this is just a silly whimsy, but collectively it becomes a problem. Targeted digital marketing is the bane of the internet and from it stems an endless flow of poorly written listicles and click-bait articles by authors principally interested in hitting the SEO bingo.

Which brings me next to the problem of ads and internet monetization. Shortly after college I explored the potential of online writing for employment. I found that the vast majority of online writing is paid for by advertisements and advertisements provide a most perverse form of incentivisation. The author quickly finds themselves writing for volume on topics selected for return on investment rather than passion. The ads themselves bring almost no return, and clutter up an otherwise nicely looking site while undermining the credibility and relationship between author and reader. The best writing online is either passion, paywalled or patronage (be it Patreon or academic).

Thus, analytics has moved to a self-hosted Piwik install. I could get the same data looking at my server logs, but I do like a nice user interface for my amusement. DNT honoring, is of course, turned on.

[Patreon][] strikes me as one of the few honest methods of monetization for an independent creative on the internet. As such, I have set up a Patreon page and would find it vastly more validating should someone someday choose to donate a dollar on it then any sum of money that advertisements could draw. That said, I do not imagine myself putting too much effort into constructing elaborate tiered rewards or crowdfunding campaigns. Gone are the days that I envisioned a career as a professional creative. I lack the charisma for cultivating a group of followers and I lack the focus to become well regarded in any particular niche. The day job covers me quite well, leaving my creative asperations to follow whatever path amuses me. Any earnings, I would imagine, would simply be passed along to other creatives on the site.

Last a word on licensing. Dr. Godfried-Willem in The Absurdity of Copyright points out the futility and logically indefensible hurculean efforts that industry takes to secure intellectual property. Ultimately, the internet is a platform for speech and is best suited as a space for promoting oneself and one’s ideas rather than a marketplace for buying and selling fictitious property claims. As such, I have placed the source code for this site under The MIT License and the content of the website under the Creative Commons Attribution-ShareAlike License.