Last month I composed a short essay detailing what I consider the “Exploration” game or “Zen Garden” game. When  I composed that essay, I had a few titles in mind that I considered the seminal titles of this genre. 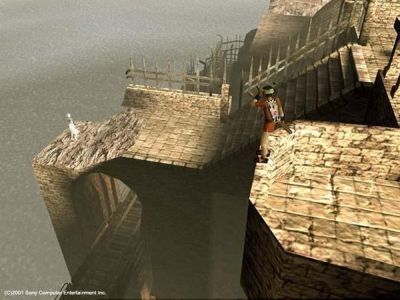 Ico came out for the Playstation2 in 2001 and it, and along with Shadow of the Colssus has recently been re-released with a graphics upgrade for the Playstation3. Ico is ultimately an adventure-puzzle game with a light mixture of combat elements. The game is played from the perspective of Ico, a horned boy who is imprisoned in a gargantuan tower. After freeing himself from his immediate cell, he meets Yorda, a magic girl who unlocks the massive stone doorways that block Ico’s escape from his jail.

The game play focuses on the difficulties of navigating the collapsing tower. Ico can climb, jump, and fight. Yorda can open the doors, but otherwise must be led by the hand through each level, and helped up walls. On top of that, if she is abandoned for too long shadows creep up from the ground and try to make off with her.

Since the puzzles themselves focus to heavily upon the environment of the game, the tower is very lushly illustrated with hanging ropes, rotting wooden buttresses, and bridges that stretch over blue watery coast. The player must spend his time examining the space, moving through it, and puzzling over how the space can be surmounted.

2. Shadow of the Colossus

This brilliant title by the same studio responsible for Ico is oft cited as an excellent example of how video games could be elevated to an refined art form.

Shadow of the Colossus takes the adventure game and simplifies it down to one aspect: boss battles. The game plays through sixteen battles with the hulking colossus – gargantuan roaming creatures who each present a unique and puzzling challenge to overcome. Yet, to reach each of the colossus the protagonist must first journey on horseback through an empty, expansive wilderness. The land is covered in toppled ruins, lush forests, and flowing steams. The colossus themselves are often gentle creatures and their deaths are pathos laden affairs that hint at a less than virtuous conquest.

Like Ico, SotC is a puzzle game merged with the real-time over-the-shoulder elements of the action-adventure genre. It’s elevated into the realm of exploration by both its lavish detail to the landscape and it’s atmospheric emphasis.

3. The Legend of Zelda, Link’s Awakening

I must sadly admit, I never completed Link to the Past and so I must put forth Link’s Awakening as the best of the Legend of Zelda 2D iterations. The Link to the Past is the definitive exploration game. The world begins first with Link awakening on a small island where he is confined to a small space by the necessity of finding the tools (sword, bow, shield, &c) that will open up more of the island. The game is riddled with little mini-games, sidequests, and clever level design that fits together like a massive puzzle.

Like Link to the Past and the original Zelda, Link’s Awakening plays from an isometric perspective. Link runs about in real-time, and unlike the traditional J-RPG, combat takes place in the over world through sword swings, arrows, and shield blocks. The other item that makes Link’s Awakening stand out over the J-RPG is the attention to detail. The realm is very lush, precisely arranged with deep care. The action-adventure game play removes the elements of grinding that have come to dominate the RPG genre. 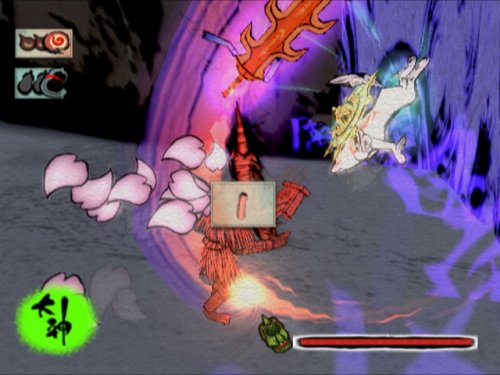 I saw Okami in 2004 at E3 and it was easily the best title on the show floor. Okami builds on the action-adventure elements of Ocarina of Time – 3D adventure title with real-time combat, item collection, clever dungeon puzzles, big boss battles, and an amusing combat system. Then it adds some new spices to the mix such as a creative Ukiyo-e look, J-RPG styled combat zones, and a healthy heaping of traditional Japanese myth. This creates a game that in every way embodies the idea of world exploration found in the Zelda series but also sets it apart with a much more mature tone and unique setting that defines Okami as a distinctive story-space from Zelda. It isn’t just aping it’s predecessor’s gameplay, it is attempting to refine it into new form.