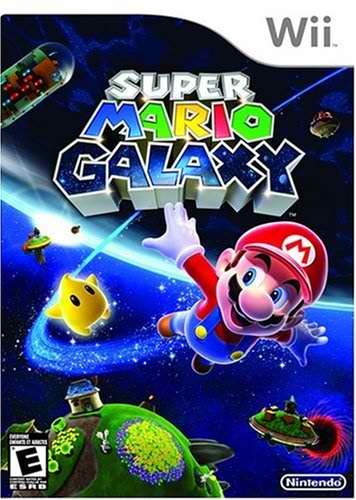 Having done Zelda and now Mario, I think I might end up with a long run of Nintendo-game-related articles.

Super Mario Galaxy was one of the launch titles for the Nintendo Wii back in 2006 when the system was still nigh impossible to find on store shelves. Wait a few years and it becomes surprisingly easy to find, however, not cheaper. Unlike Sony, who tends to drop their best-selling title prices soon after launch, Nintendo keeps prices high and even today a copy of Mario Galaxy runs for $40.54 on Amazon, a mere $6.37 cheaper than it’s recently released sequel. Writing a review of such an old game on a gaming-blog is probably preaching to the choir. Get used to it, I plan on writing many more articles about even older hit titles.

Super Mario Galaxy contains the same amount of plot expoltation as the original Super Mario for the NES: a hair-thin plot of a giant turtle kidnapping a princess, and the red-suited man who goes to save her. Mario is and never was much for plots, nor should it be! Mario is all about giving someone an excuse to explore the imaginative spaces of level designers. The collecting of coins, stars, and defeating of bosses are just a thin glossing to give gamers incentives to pick around through each of the game’s many “galaxies.” Because of this, Super Mario Galaxy realizes, much better than Super Mario Sunshine, the game-play that made Super Mario 64 so compelling to play through and complete.

To get an idea of Super Mario Galaxy’s gameplay simply imagine Super Mario 64, but wrap each stage into a sphere with its own gravitational pull. Mario leaps, bounces, and flies between these spheres landing on one or another and often running up walls. Intermixed amongst this is more traditional levels in which gravity is clearly down and leaping off the edge causes death.The opening stage expresses the creative potential of the game and the gravity-bending aspects will contribute to future stages as they produce increasingly surrealistic playgrounds for exploration.

At this point in the game my only complaint is against the musical score and progression. The tempo, much faster than earlier Mario games, tended to discourage idle exploration in the earlier stages. I felt rushed to run through each level, grab the star and move on to the next level. Perhaps because of this fast tempo, the rewards in the early stages come too quickly. I collected many of the stars necessary to unlock the advanced stages in just a few hours, and (to my surprise) was able to beat the game with only 60 of the 120 stars in the game. Thus, I beat Koopa long before I even had a taste of the game’s true potential. I can imagine that this quick progression is because of the title’s launch status. If Nintendo intended this game to attract new gamers than a difficult learning curve might put them off from future game purchases. 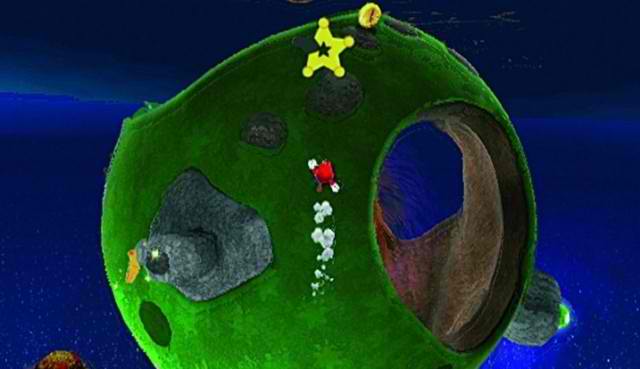 Super Mario Galaxy wins back whatever scorn I might put upon it in the latter half of the game. After beating Koopa, all new coin-collecting stages appear which encourages a much more methodical approach to the galaxies. The pacing also slows in later galaxies and the time spent completing puzzles in a level to advance and collect each star lengthens as the levels progressively get larger and more complex. The result is that the more experienced gamer who progresses on to collect all 120 stars is rewarded with a much more engaging game even while the new-comer can collect the reward of “winning” early on. Secret stars compound this by sending Mario back to old galaxies looking for alternative routes to completing each stage, and “prankster” comets mix up the levels by adding extra difficulty through time-limits, faster enemies, ghost-races, and on-hit-kills health.

It took me 20 – 30 hours of play to collect all 120 stars in Super Mario Galaxy, which puts it on par with the length of most contemporary games. As an introduction to the Nintendo Wii, I think Super Mario Galaxy makes a great game and one that I think Nintendo hoped would demonstrate the possibilities of reinvisioning older game genres with their new control scheme. It is a pity that Wii Sports became the real champion of the system rather than Super Mario Galaxy, as there is a glut of mini-game Wii titles, and very few platformers of Super Mario Galaxy’s caliber.