Let me begin my series of filler sketches by going over some character sheets. In the past months, I’ve sketched the characters over and over again. Some character like the Dwarf, or Don came naturally to me. I sketched them down once, thought them satisfactory, and went on my way. Som and Ivan, however, never felt right. Occasionally, I get a frame where I think “yes, this is right. This is what Som should look like.” More often, I flounder about and the only connection from one frame to the next is that she’s the only female caste member. Thus, this week I present a series of character sketches created as I tried to nail down her design.

I spent a lot of time sketching Som because some part of me wants her character to look right and wants her to have the right appearance and a consistent look from one frame to the next. My lack of proper life-drawing skills shines through with her character. While Don and the Dwarf can get away with being abstract boxes and bulbous shapes, I wanted the characters of Som and Ivan to have more realistic proportions which entailed a less abstract approach to their characters.

A lot of Som’s clothing is based on Robert Henri’s paintings from the turn of the twentieth century. There is something very sensual about how the woman hold themselves in Henri’s work. They exude a kind of self confidence that makes them seem powerful and seductive. Certainly, this doesn’t fit the personality of Som. However, there will come future female caste members who might embody more of that spirit. Nonetheless, the dresses of that period are so gorgeous in their complexity. I saw Henri’s painting of Jessica Penn while living in Seattle last spring and I instantly wanted to find some way of incorporating that dress into the comic, and behold this Monday, I made it in! 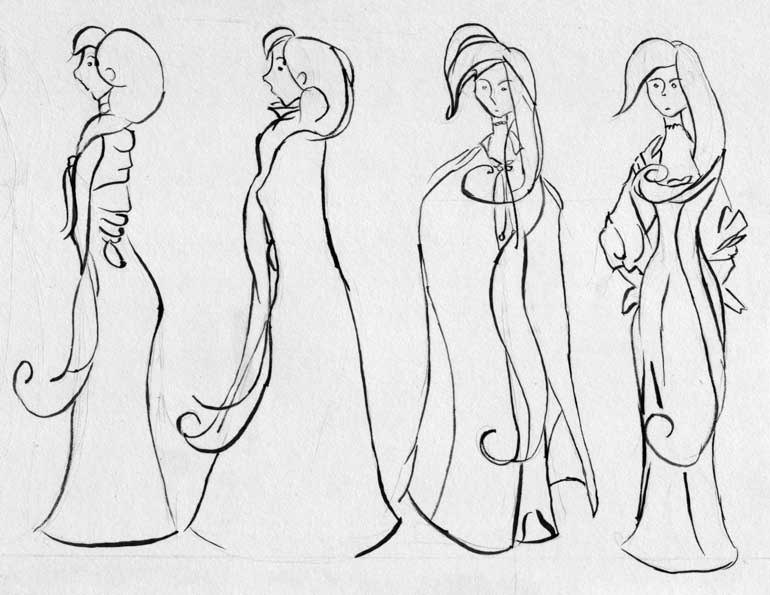 The character sheet above is done on standard sketch paper of 8-1/2” by 11” with a 4H pencil then inked with a size #0 Winsor 7 sable brush using Indian ink. I scanned the image in at 300DPI and 1200DPI using a flatbed scanner. I give these details only for the more technically minded, but take note of the DPI, as I found significant changes to the end result based on my initial scanning resolution.  Progressing from right to left I drew Som facing forward and than profiling the page. The Jessica Penn dress makes its appearance, but I imagine it will rarely be seen since most of the comic takes place outside and so she will be wearing her traveling cape through most of the comic. This is quite convenient as the dress is more time consuming to draw. I am happy with the results of the profile images as well as the drawing on the far right. Nonetheless, I am unsatisfied with the front-view cape image as she appears to be scowling, an effect I didn’t want to create.