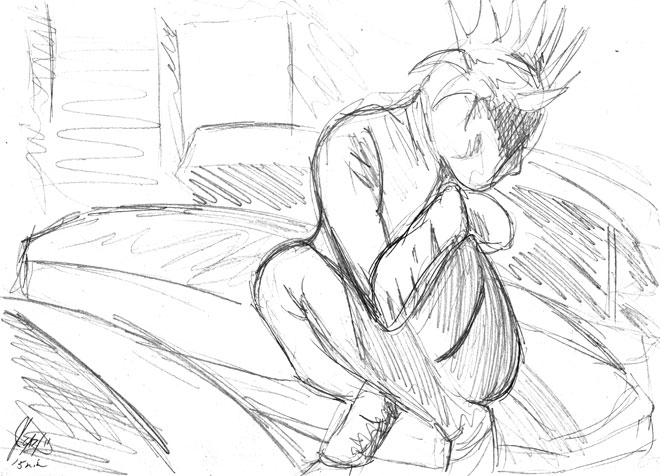 Wow! Over a month since my last post. Time as a Park Ranger get’s away from me during the summer. I want to be underground in the cave, above ground on the trails – everywhere with a camera and back at the apartment working on my art.

This last week I worked on sketching from screen captures of various music videos. The one selected for the blog is a sketch from Lady Gaga’s “Bad Romance.” Now, I must say that Gaga is not really my typical fair (I’d more of a Progressive/Post Rock fan with a long playlist of Yes, Coheed & Cambria, or Godspeed You Black Emperor!). Nevertheless, the directorial work in Gaga’s videos is astonishing and I’m blown away by the aesthetic detail and complex imagery conveyed through the likes of Gaga/Klein’s Alejandro, Gaga/Francis Lawrence’s Bad Romance, and Gaga’s Judas – I must commend the music videos for taking it quite a few steps beyond the normal fair and more over for their creepy design that’s remeniscint of Guillerno del Toro’s monster designs in *Pan’s Labyrinth *.

In some other semi-related news to my sketches, I’ve begun work on storyboarding a comic book adaptation of The Saga of the Volgsungs which will be my next work now that the first chapter in Ivan at the End of the World is coming to a close. I decided that I needed to work on my plotting and what better way to do then to steal a page from the bard and go rooting through old myths with established track records.

When I started the process of storyboarding Volgsungs I was imagining myself keeping the artwork rather similar to it’s Norse origins. However, as I began my music video sketches, I began to imagine the work taking a much darker “cyberpunk” feel – an adaptation that would set the work in a much more futuristic fascist state. The project is rather exciting to me, yet will be a long time in coming with all my other (see above!) summer side interests.