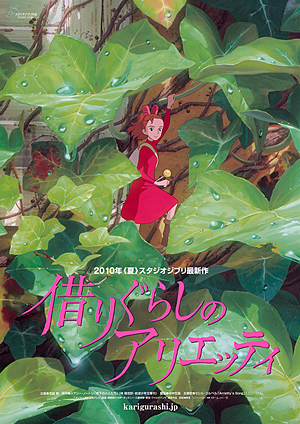 I saw the trailer to The Secret World of Arrietty when I went out to watch The Muppets back in November. Now mind you, I was out on Thanksgiving break visiting my folks in the frigid north of Escanaba, Michigan. The Northern Midwest is not know for its taste in eclectic films – theaters up there typically run the top selling Hollywood flicks of the week and little more. So you can imagine my delight to see a Studio Ghibli film being advertised in such a mainstream venue!

It seems that this is a new move for Disney, which according to The Ghibli Blog, will be promoting the film with a release in 1,200 theaters this month.  Unfortunately, from what I can find: there is no release scheduled for Sioux Falls. So I’m either going to have to drive or wait for the DVD release.

"The Secret World of Arrietty" by Joseph Hallenbeck is licensed under a Creative Commons Attribution-ShareAlike 4.0 International License.