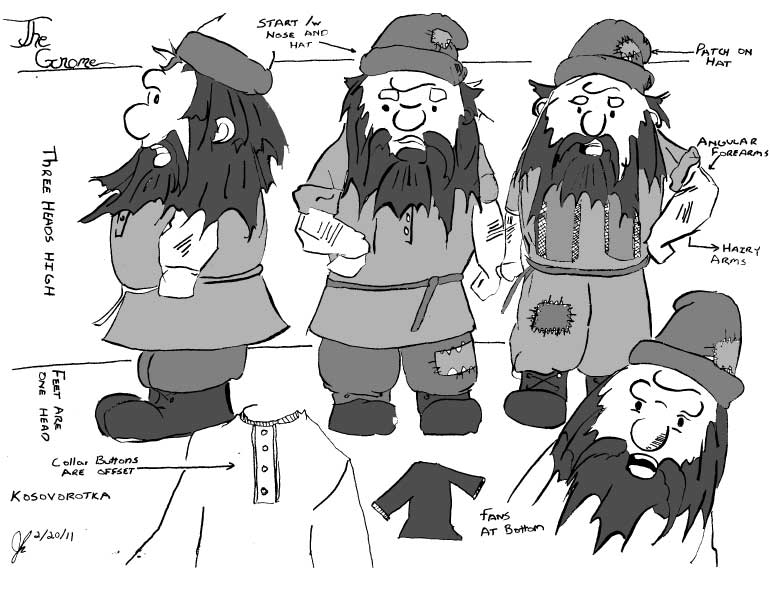 If you actually read my blog entries you might begin to notice a very nice pattern to them. It begins “I promise to start updating!” Soon after making such a promise, I look at the comics to come and realize that they suck. I drag my feet on releasing them. I dabble with just starting over. I draw some character sketches. I “practice” my inking. So very many excuses, and fortunately, so very few readers to complain!

My excuse this time? I am working on the script and the background. When I began to write up the background, I found myself really getting into it. Suddenly characters had purpose, the world had a map, and the plot flowed out. However, I noticed some problems. First, much of what I wanted to do with the characters ran contradictory to what the comic already established. If I continued posting the present line of comics unedited, I would only push myself further from my plans.

Instead, you get more filler art and this week’s entry is the Gnome.

Who is the Gnome? Well he is a gnome of course! In appearance, he is a short, angry little earth spirit who was quite fed up with the big people of the world bumbling into his affairs. Already, the comic establishes that his manners are rather lacking and he is fond of arguing.

The Gnome was the first character whose design came together. I started with a big circle for the nose, then the rim of the hat above, then drew tuffs of hair sticking out from beneath, forming a circle around his face. The Gnome’s body extends out from the edges of the beard to make a barrel shape. His cloths are rather traditional. Whenever I imagine Gnomes or Dwarves in their casual wear it’s always in the form of big boots, baggy trousers, and a tunic of some sort. In the case of this dwarf his tunic is a kosovorotka, a traditional Russian shirt known for its skewed collar. Out of everyone, the Dwarf has been at the End of the World the longest, and so his clothing is ragged and patched from many years of use.