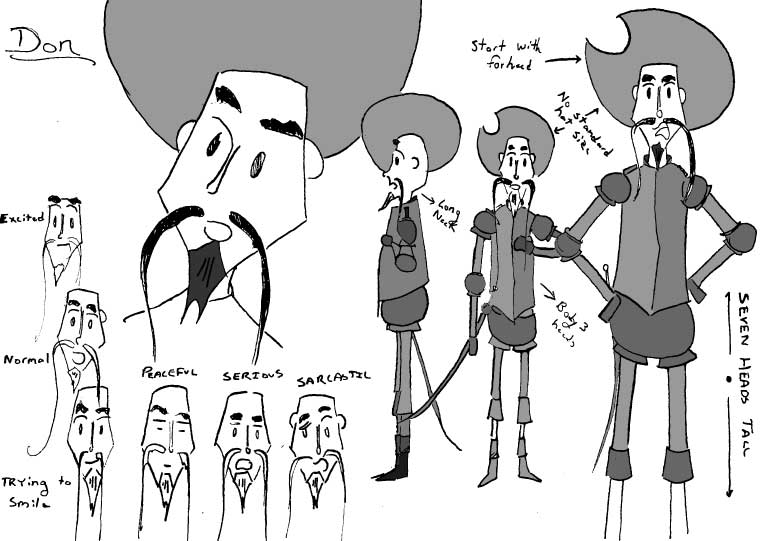 The process of working on the comic continues and today I present my draft sheet for the character of Don.

I tried on this sheet to experiment a little with his design. For one, out of all the character’s Don was the most complete out-of-the-box. He is based on a statue of Don Quixote that my drawing professor at Augustana had us draw. Indeed, many of these characters are based on weird statues he had us draw. Thus, when it came time to draw his character sheet, I decided to experiment. I colored in his mustache, removed the bandeliers and tried for a more realistic shape to his breastplate. In the end, I think I liked him just the way he was.

A second bit of experimentation comes in the inking. Previously, I inked with brushes, but I decided that I ought to be more discerning with them. For example, Tamar Curry’s Lumia’s Kingdom (whose artwork I admire) tutorials show him inking with dip pens. I love dip pens for my scenery look, but kept to brushes for characters and organics even though I find brushes much more difficult to use. On this sheet, I went with dip pens throughout, and the result? The lines look less confident on the larger images and far too uniform. Yet, in Ivan’s character sheet (coming up next!) I discovered that the brushes really do work – I just need to double or triple the size of my character drawings. Pens work well for the fine details of the backgrounds and smaller depictions of the characters (less than 1” tall heads), but once I get into having 2” - 3” tall heads, the brushes look much more graceful and overall 9” tall characters seem to be easier overall to draw.