It was my luck that The Secret World of Arrietty came to Sioux Falls. This is my first Ghibli film that I could see in its proper setting: the big screen and I must say that it was a spectacular treat for the eyes, replete with stunning backgrounds and gracefully animated characters who play out yet another fantastical story. While Arrietty will probably not be my most favorite Studio Ghibli film, it does possess the wit, charm and magic that I expect from the creators of Spirited Away, Howl’s Moving Castle, and Princess Mononoke. It’s only real lack is in it’s pacing, which seems much slower than past fare and for some may be too slow.

I happened to watch Spirited Away the day after seeing Arrietty and it occurred to me how much sense of atmosphere Ghibli creates in their films through the deep sense of place and connection that chracters have with the environment that they occupy. Ghibli certainly pays very close attention to the details in it’s stories and illustrations and I think that this sense of environment is just one example of stroytelling that makes their films so tremendously delightful.

Environment in story informs the characters and plot, or at least it should if the author is paying any attention to their setting. A character who is actually living in their world will face the unique limitations that their environment creates – their culture, actions, and life will all be informed by this setting. Ghibli films realize this reality in a way that so many other films simply ignore. Their worlds draw upon the ambient emotions that nature’s many forms (violence, tempered, serene, and sublime) create in the human psyche. Let me take a quick glance at a few Ghibli films and illustrate how this plays out: 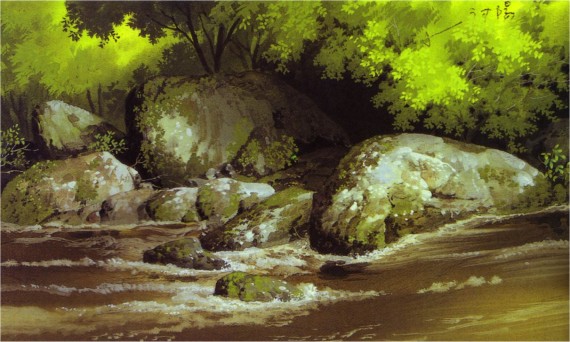 The atmosphere of Mononoke drips of the time when the wilds were an alien and unforgiving place for mankind. Early on in the film we see the difficulties that civilization has sought to overcome: the danger of predatory animals (Moro), the difficulty in navigating the wilds (the muddy and treacherous caravan trips), and deadly weather. Yet, nature still possesses a sense of serenity. The Emishii peoples seem to live a harmonious existence with nature as does San.  The characters who find nature the most brutal are the ones who act the hardest to work contrary to their environment. Overall, the scenes create an atmosphere that mimics the internal difficulties of each scenes principal characters. For the caravaners the woods is a dangerous, frightful place but in the hands of Ashitaka the woods becomes a land of delightful and helpful spirits – the differences not in the woods, but in how the characters approaches dealing with their sense of place in the natural world. 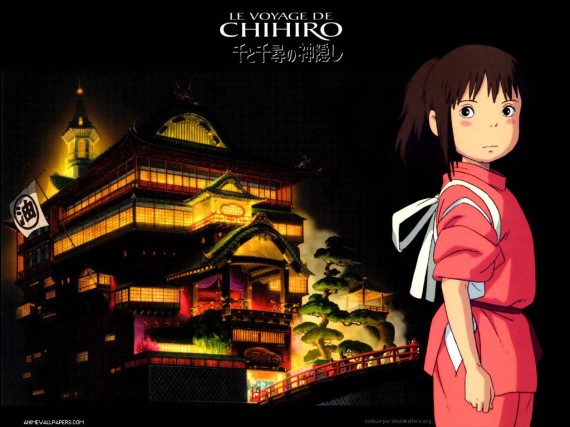 Since Spirited Away takes place in a bath house and not the wilds we see a very different approach to place. The bath house of Yubaba is a fusion of Japanese and Chinese aesthetics that exaggerates the more gaudi elements of Chinese style and completely abandons Buddhist simplicity in everything but its depictions of the natural world. The bath house is simply an extension of Yubaba, who is a greedy and gluttonous crone. We see these characteristics not only in her employees but reflected back to them by Noh-face who absorbs the essence of the place as he stumbles about eating the staff and flinging gold about. Not until he disgorges the filth of the bath house can he go back to his simpleness. 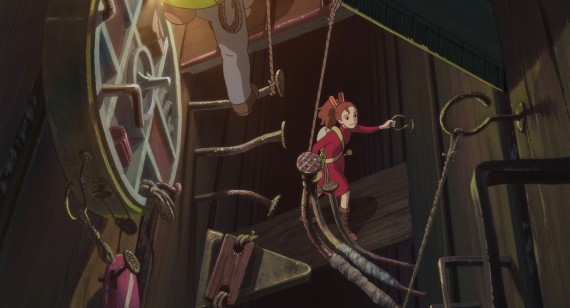 The world of the borrowers takes on a much more realistic charm that lies less in the fantastical elements as much as trying to showcase how the borrowers would interact with their gargantuan environment. Arrietty’s family lives in the walls of houses where they make their way about using ropes, nail staircases, and simple free-climbing techniques in an adventurous method that reminds me of real-world caving. They “borrow” from their environment as they take only what they need from the Beans who they both live beside and in fear of. I think in Arrietty we see a kind of modern Emishii where their lifestyle nurtures a kind of connectedness to their environment that emphasizes a sense of propriety over taking only what is needed while leaving the superficial (the gaudy playhouse) behind.

"Connecting Characters to Place in Ghibli Films" by Joseph Hallenbeck is licensed under a Creative Commons Attribution-ShareAlike 4.0 International License.