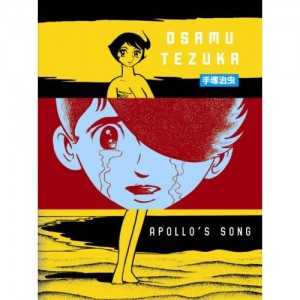 I recently procured a copy of Apollo’s Song which, like many of Tezuka’s works, is printed in a thick 500+ page single volume. The first English run was in 2007, and currently is out-of-print according to Amazon. Nevertheless, Vertical has a good reputation for keeping its library in print and has republished the text in a two-volume series.

Apollo follows the lives of Shogo, a young boy whose admitted to a psychiatric hospital for his atrocious abuse of animals. Due to an abusive upbringing by a prostitute, Shogo is unable to love and finds the pairing of even animal mates repulsive. During his first treatment of shock therapy, Shogo experiences a vision in which he is visited by Athena, the greek Goddess of wisdom. She foretells to Shogo that because of his transgressions against love he will be denied the sanctity of love – in every life that he finds a women to love, the two of them will be divided and perish shortly thereafter. The remainder of the text follows Shogo through each of these lives lived: WWII, a present-day Eden, the present “real” world, and the future. In each of these lives Athena’s fate follows him in an endless tragedy.

We must keep in mind the time period in which Tezuka is writing: the 1970s which at least some sources hint at being fairly conservative towards educating Japanese children about sexuality and is following up on his, perhaps more artistically complex Ode to Kirihito. For coming so late in Tezuka’s career, I am suprised by Apollo. The art is very much a throwback to his earlier works. Characters, on Scout McCloud’s big triangle, are quite a bit further away from resemblance – they are far more abstracted and morphic. This can, at times, distract from the seriousness of Apollo’s pathos. Perhap’s Tezuka’s throwback to his earlier days is because Apollo is a much more positive encounter with Tezuka than his medical dramas, which often focus on the brutality and selfishness inherit in the human character. If we were to find ourselves living in the world of Kirihito alone we would find it a brutal, uncaring existence filled with selfishness and cruelty and very much lacking the friendship and love that Tezuka attempts to address in Apollo.

The nature of manga publication in the United States is that it is a youth-dominated market and the youth want what’s hot and new in Japan today. This leaves those of us who are more interested in manga from a cultural perspective in the dust as, short of learning Japanese (or French), we have little access to some of the older volumes such as the works of Tezuka, Tatsumi, or Matsumoto. For this reason, I must continue to sing endless praise for the fine work of the editors over at Vertical, Inc. who have been faithfully translating the ovouer of our good Tezuka.