Ano Hi Mita Hana no Namae o Bokutachi wa Mada Shiranai, or why are the Japanese Titles so Long?

I started to dig through the noitaminA block of Anime from the last few quarters to see if anything got a good review on ANN. I find that anything from noitaminA and gets a large volume of tens has a tendency to live up to my expectations. What I stumbled upon was Ano Hi Mita Hana no Namae o Bokutachi wa Mada Shiranai or We Still Don’t Know the Name of the Flower We Saw That Day. I am perplexed by the length of this title. I find Japanese titles often end up being oddly long before domestic translators get a hold of them and chop them down to size. I don’t even think we could turn this into a acronym AHMHNBMS?). I’ll call it Ano Hana for now. Below consists of my initial impressions of the first episode. 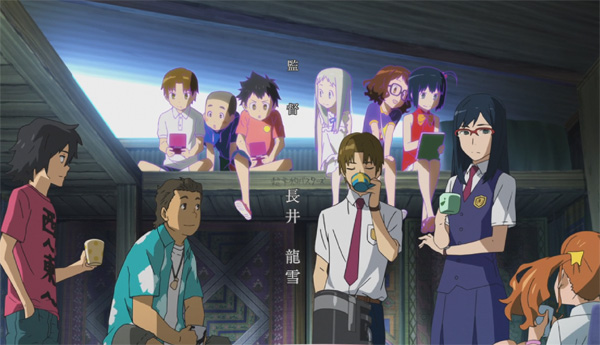 The production value of Ano Hana is, akin to most noitaminA productions: very high. The backgrounds are rich and complex with a healthy mixture of colors. The character designs are varied and animations rather well done. That said, my initial impression is to be unimpressed with Ano Hana.

We get a fairly good outline of Ano Hana’s plot in the first episode. Menma died in a childhood accident, her ghost returns to Jinta to ask for a wish to be granted. The young ghost forgets the wish and instead tries to get the, now older, Jinta back together with his childhood friends. Jinta, a shut-in, has little interest in going out to socialize with his old friends who have drifted apart becoming shallow and vain teenagers. This plot seems far too ripe with pathos for the age of the cast. The flashbacks to their childhood, which is really just a few year’s prior, held little power when I realized that the characters still had a long, productive life ahead of them. At least Ebenezer Scrooge was visited after a long, unproductive life when we can actually feel sad for his having wasted it. Such makes the meager few years that Jinta and company spend saddened by Menma’s demise paltry in comparison. 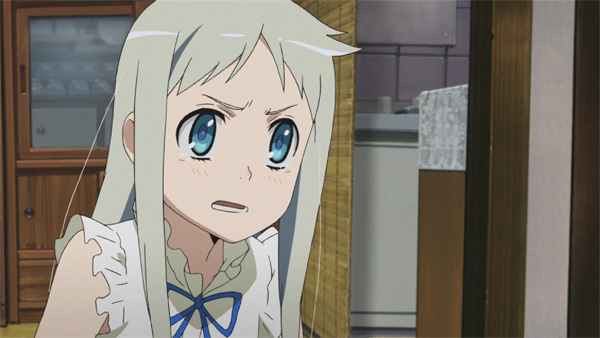 Moe character type. Her design is reminiscent of K-On! or Sora no Woto and showcases a similar characterization to K-On!’s female cast. A full analysis of why I do not particularly care for Moe would require more space than I wish to go into right now. In simplest terms: I feel that reliance upon such pre-built characters tends to generate a very shallow story, one that I have seen before and have no interest in going through over and over again. Anaru, Yukiatsu, and Tsuruko also seem like rather shallow characters, the caste is only saved by my interest in the character of Poppo who appears at the very end of the episode. Suddenly, I have a character who I might be able to relate to and find interesting enough to continue through the entire series.

"Ano Hi Mita Hana no Namae o Bokutachi wa Mada Shiranai, or why are the Japanese Titles so Long?" by Joseph Hallenbeck is licensed under a Creative Commons Attribution-ShareAlike 4.0 International License.