Another Alien Invasion - The Darkest Hour

On a lark, I went out to WestMall7 and choose to watch whatever film happened to be airing. Now, WestMall7 is Sioux Fall’s second-run theater. Its good for its cheap popcorn and cheaper tickets. Although, much of the popcorn seems to end up on the floor in this place and  The seat cushions, I believe, are from the 1980s – the springs long worn out.

I have been avoiding WestMall7 for the last couple of months on account of there being no good films out. The Christmas flicks have yet to hit the screen and the flicks that aired between the summer blockbusters and the holidays are a rather large collection of duds. I settled on The Darkest Hour as what seemed the least worst film. 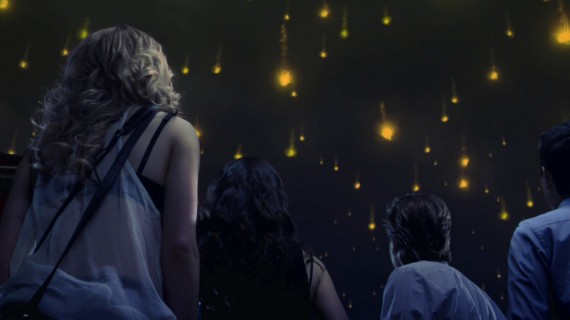 The Darkest Hour is about a group of early twenty-some-things trying to escape Moscow after an attack by an alien force. The film follows the fairly routine alien invasion that we have come to expect from the offspring of The War of the Worlds. Although, unlike Independence Day which attempted to modernize War of the Worlds with a computer virus rather than biological virus – The Darkest Hour falls into a distinct escape from the invisible monster scenario.

I expected this film to be one of the laughably bad kinds. The marketing department that designed this film must have thought that the audience wants to bond with Mark Zuckerberg impersonators and  the bubbly-headed American tourist girls who seem terrified to be outside of their home country.

Empty characterization aside, some of the ideas in The Darkest Hour are rather interesting and if the writers explored these ideas in a more unique manner (rather than hacking together a cookie cutter sci-fi flick) we would be walking away with a much different impression of the title.

For example, the aliens of The Darkest Hour are energy-based life forms. This idea has been explored in written and televised works, but never in this much depth. The characters face a difficult challenge in defeating and understanding an opponent that is essentially invisible and detectable only through the destruction is creates and side-effects that it has on electrical equipment.

Nevertheless, these ideas are never really explored. The protagonist explains them away in narration – why they want to attack earth is never explored, but just given to the audience, much like the characters are given each of their solutions to the alien threat. Midway through the film, after just days from the initial alien attack, mad scientists suddenly appear seemingly anticipating the attack and armed with portable electron guns and protective faraday cage hideouts. Militias appear who seems to have a deep understanding of their invisible opponents and have developed technologies and tactics to defeat these invaders that belay more skill and artifice than could be learnt in a weekend.

Hence the largest issue in The Darkest Hour: pacing. The protagonists shelter during the early invasion in a cellar and emerge a week later. In that time, it seems they have been transported twenty years into the future.

Other issues abound. The protagonist discovers that the aliens are blinded by glass. Yet the writers ignore this fact when the aliens, from the street, spot the characters rummaging inside an apartment building hundreds of feet away. Likewise spatial logic is redundant as one character falls off a boat and ends up transported miles away across the city. Are we to suppose that upon reaching shore she decided to walk away flee from her companions rather than attempt to meet up with them at their destination some hundred yards down river?

I am glad that it was a mere three dollars to see The Darkest Hour and I should hope that in the future such ill thought works can be kept to the SyFy channel.

"Another Alien Invasion - The Darkest Hour" by Joseph Hallenbeck is licensed under a Creative Commons Attribution-ShareAlike 4.0 International License.