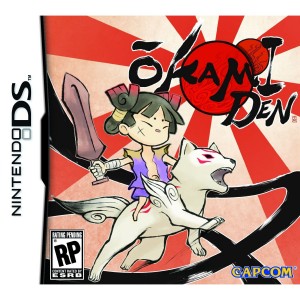 I am six hours into Okamiden right now or roughly a quarter of the way through the game. Considering Okami is one of my favorite games for the PS2, Okamiden as a sequel has some very big shoes to fill. My initial impression of the game was just how similar Okamiden is to it’s big brother. It replicates many of the game environments from its predecessor, the brush-manipulating game-play techniques, and graphical styles. Yet, it does this in a very paired down system and it can be difficult to judge Okamiden harshly because it’s landscapes are more restrictive, combat less frantic, or content less grandiose.

After a few hours, the comparisons drift aside and I can enjoy Okamiden for what it is – a very fun adventure title that captures all of the witty plots, beautiful scenery, clever puzzles, and elaborate art of it’s predecessor. I am even glad to see such a faithful recreation of Okami’s setting since returning to Shinshu fields and Kamiki village brings back a very fond memories of the other games. I get a great deal of delight in reconnecting with the characters of Mr. Orange, Susano and Issun – much like meeting friends whom you haven’t seen for a long while over for lunch. In many ways, this gives_ Okamiden_ the feel of an after-story, or a kind of prologue to the events of Okami in which the protagonist revisits the places where he has been in a kind of mini-adventure, such as when Frodo returns to Hobbiton in The Lord of the Rings.

The plot generally follows that of Okami: great evil sweeps over the land, demons abound and the wolf-god Chibiterasu, the descendent of Akamatsu (Okami’s protagonist) must go about the world cleansing it of the presence of demons and restoring the land to health so that the cherry blossoms and bloom again. The strength of the plot is that it keeps pulling you back to old characters and developing them throughout the game rather than pushing the protagonist out into a world of generic cardboard characters and endless scenery changes. I expect to return to the village of Kamiki and Yakushi time and again throughout the game as I chase over old hunting grounds on new quests. This sense of place found in the Okami series captures the spirit of Ocarina of Time better than any of the Zelda titles that attempt to homage that N64 title.

The aesthetic experience of Okamiden recalls the Edo-period wood-block prints of Japan with tapered outlines and a very warm solid palette of colors. However, recreating the style of Okami on the DS’s limited hardware causes some issues. Frame-rates for character animations seem rather low giving Chibiterasu a bit of a jumpy walk and causing combat to be disorientating. The maps are also cut into very limited spaces requiring load times when stepping from one space to the next and interactive objects only loading into view once Chibi is nearly standing upon them. Okamiden could have taken a note from the old Super Mario 64 title which has much more seamless loading transitions.

Despite these fallbacks, I would say that Okamiden is beating out all of the DS Zelda titles for the crown of “best” DS Adventure game. I am looking forward to playing through it to the end and getting back with a final report.